Three signature projects are some of the focal areas of a $104 million capital works program budgeted for 2022-2023.

The amount of capital expenditure for 2022-2023 allows council to address key areas without the demand for additional borrowings.

“We are continuing to build on signature projects that are on the table and progressing well,” Mayor Williamson said.

“Ground-breaking works commenced in March for Mackay Waterfront’s Riverside Revitalisation project, which we know will be a game changer for our region,” he said.

“And with the adoption of today’s budget, we will see an additional $6.2 million put towards River Street’s service road and further riverside improvements.”

Deputy Mayor Cr Karen May said, as a council, we serve a vast region with a small rates base compared to many other local government areas.

“This includes $2.3 million for Pioneer River levee construction between Rivers Edge Estate to Heaths Road and $1.9 million for drainage restoration works on Oak Street in Andergrove,” she said. 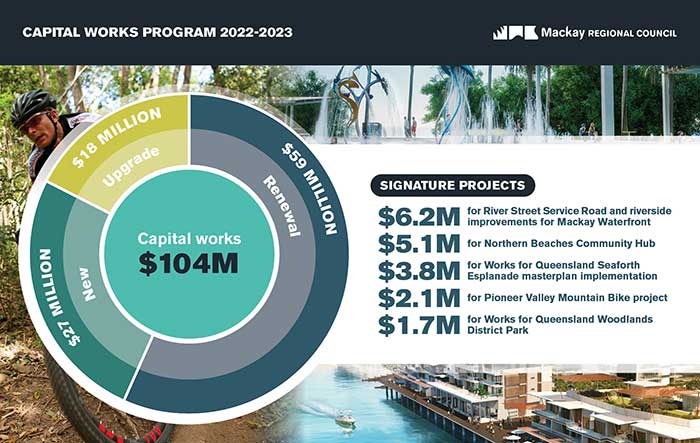