One day, in 2008, Kylie Whamond looked through her fence and saw her neighbour, Katie Porter, was in tears.

Katie and her husband had recently moved to town with two children in tow and another on the way.

They had no support network in Mackay and Katie wasn’t coping well.

“I had morning sickness, was feeling depressed and had a hubby who was away at work – it wasn’t a good mix,” Mrs Porter said.

“Kylie saw me through the fence and took me under her wing,” she said.

“She helped me in so many ways by just being there.

“Kylie was always there to babysit and help me in any way she could, but one day my six-week-old had trouble breathing.

“My baby's airways shut down due to an RSV (respiratory syncytial virus) and we almost lost him.

“Hubby was away, and I was stuck at the hospital with my baby being intubated and his three siblings with me as it was happening.

“I had nobody I trusted, but Kylie, despite having her three kids, came to the hospital and took the kids home for me.

“She bathed them, fed them and gave them a comfy bed to sleep in until my husband got back.

“I don't think I could have gotten through everything without her kindness and generosity.”

Katie said the ways in which Kylie and her husband Bill had helped them were numerous and unbelievable.

“For example, my daughter is obsessed with mustangs, so last year Kylie organised a group of mustangs to drive past our place, each stopping to give her a birthday balloon – it was such an amazing experience for my daughter,” she said.

In recognition of the Whamond’s amazing display of neighbourly kindness, a panel of judges awarded them the title of Mackay’s most legendary neighbours this week.

“We had more than 70 amazing nominations – and I know there were a few misty eyes amongst the judging panel while we were reading the shortlisted entries,” Mayor Williamson said.

“We have some tremendous neighbours and streets in our region – from residents who have mowed lawns for more than a year while their neighbours have been stuck overseas, to neighbours who have stepped in during times of crisis and ill-health to provide support in a multitude of ways.”

The Mayor said the Legendary Street Award had a clear frontrunner.

“We had so many amazing nominations from the proud residents of Marlin Court, Andergrove,” he said.

“Not only do they have a group of passionate ‘smokers’ in the street who, on weekends, smoke and share meat, but they have created a community in their court where everyone is welcome, safe and included.”

Marlin Court resident and smoker Amanda Grobbelaar said there was no other street like theirs.

“We have all generations in our street, from grandparents to expecting first-time parents,” she said.

“We all get along beautifully; we feed pets when owners go away for holiday; we put up lights at Christmas and we put bins away and collect post and take out the junk mail when we know our neighbours are away.”

Her neighbour Joe Rickman said he considered the court’s residents to be family.

“The young kids play in the street and grow up together like the old days,” he said.

“We have constant barbecue get-togethers and are always looking out for each other – even to the extent of driving each other’s kids to hospital when emergencies happen.”

These legendary neighbours and several runners up will enjoy a host of prizes thanks to the generous support of Porters Mitre 10, Sinclair Meats and the Deli Nook.

Mayor Greg Williamson said council had also arranged a special street sign blade for Marlin Court that will immortalise them as “Mackay’s most Legendary Street 2022”.

The My Legendary Neighbour campaign is an initiative of council, supported by Star 101.9 and 4MK. Neighbour Day 2022 will be held on Sunday, March 27, and is Australia’s annual celebration of community, encouraging people to connect with their neighbours. 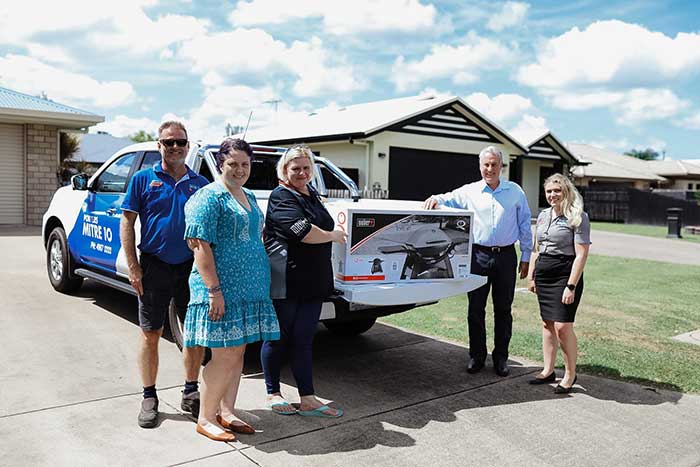 Marian resident Katie Porter nominated her neighbour Kylie Whamond who has been crowned the region’s Legendary Neighbour for 2022. 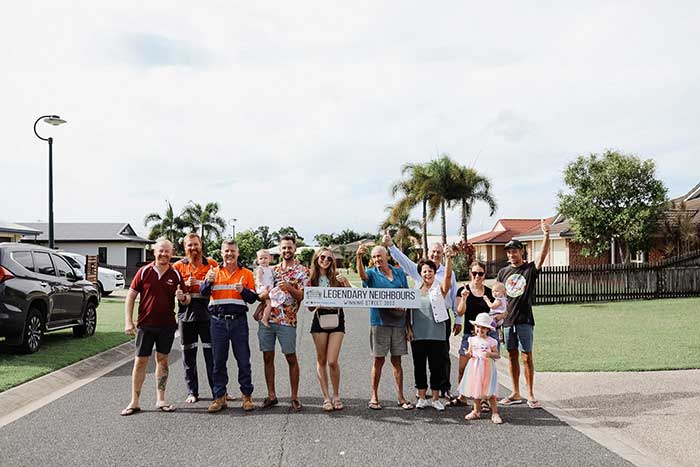 Marlin Court in Andergrove has been crowned the street winner as part of the 2022 My Legendary Neighbour campaign.