The funds will help them further their artistic, personal and creative development through tertiary studies.

Ben has been accepted into a Bachelor of Music degree at the Central Queensland Conservatorium of Music this year.

Mayor Greg Williamson congratulated Ben on receiving the honour and acknowledged his community work with the Mackay City Strings.

“Ben is a foundation member of the Mackay City Strings, a string band that offers their services at many church fairs, outdoor events and retirement homes,” Mayor Williamson said.

Ben’s commitment to the cello hasn’t wavered since he was in year three at Andergrove State School and first brought home the instrument.

“I remember my mum asking me what I was thinking, because it was so big and fragile,” Ben said.

“But I fell in love with the cello and my love has not faltered – I’ve played cello all through my school years,” he said.

“The recipient of the $1000 Rick Wood Bursary is Hollee Standen,” he said.

“Hollee is a passionate artist who has contributed greatly to the beauty of our region through various projects, including a mural at Pioneer State High School, the design of the school mascots and a sign depicting local wildlife at Kinchant Dam.”

Hollee has been accepted into a Diploma of Visual Arts at Central Queensland University.

“Ms Roebig Holmes is currently completing a Bachelor of Fine Art and is a well-known artist in the Pioneer Valley,” said Mayor Williamson.

“She recently coordinated a creative recovery project in areas affected by bushfires in the Eungella and Finch Hatton regions called Our Resilient Community.

“Residents came together to share their bushfire stories while also learning about felt making, blacksmithing, collaging, charcoal drawing and other artistic practises.

“It was very much a case of healing through art, and that’s tremendous to see.” 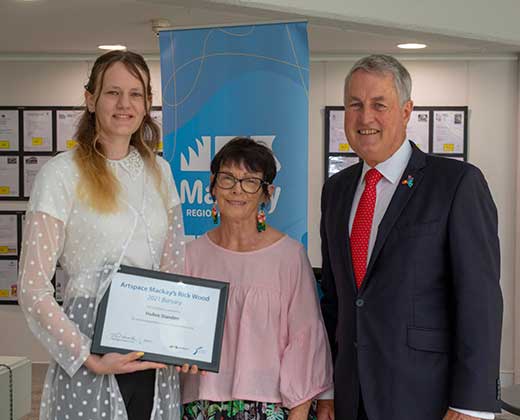 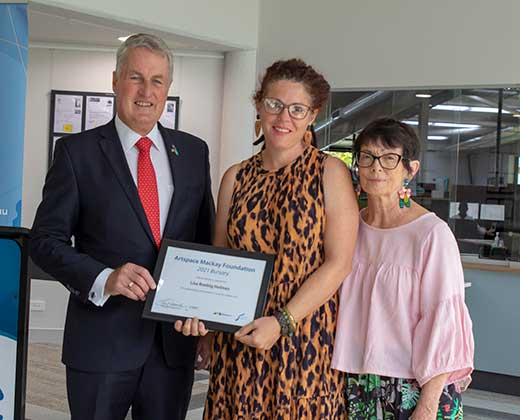 Artspace Mackay’s Rick Wood Bursary honours the memory of the late Rick Wood, a celebrated Mackay potter. The bursary was open to students of the Mackay region completing year 12 in 2020, who wished to pursue a career in any aspect of visual arts or creative industries.

All three bursaries may be used for tuition fees, textbooks, equipment or expenses required as part of the student’s studies.