The impact of COVID-19 on travel has replaced employment as the top concern for the future of Mackay residents about 18 months into the pandemic.

And although most residents are faring okay financially, the impact on mental health and wellbeing remains a worry.

Concerns about vaccine development 12 months ago have also shifted towards concerns about the rollout of vaccines developed.

These are some of the main findings of A COVID-19 Community Pulse Survey conducted recently by IRIS Research on behalf of Mackay Regional Council.

This survey compared results of one undertaken by IRIS Research back in May 2020 about five months into the pandemic.

Mayor Greg Williamson, who is chair of the Local Disaster Management Group (LDMG), said it was felt that council should check back in with residents 12 months on from that original survey.

“That first survey provided benchmark results and this follow-up survey has checked in on how residents are feeling now and what the main areas of concern now are,’’ Mayor Williamson said.

“Although concerns about the financial impact of COVID-19, including the impact on employment, have eased since May last year, there are still concerns about mental health and wellbeing,’’ he said.

“That is understandable when residents who responded to the survey rated the impact on travel and being away from family or friends as the top two concerns.”

Mayor Williamson said the recent survey showed Mackay was getting back to normal.

He said only six per cent of respondents felt at risk of losing their job, compared to 19 per cent in 2020.

“However, 17 per cent had still experienced reduced hours or income, compared to 27 per cent at the same time last year.”

Mayor Williamson said 74 per cent indicated they were not impacted financially by the pandemic, compared to 68 per cent in 2020.

“Only 17 per cent feel at risk of their financial situation worsening, down from 29 per cent last year.”

Deputy Mayor Karen May, who is chair of the LDMG’s Human and Social Recovery Sub Group, said one pleasing thing about the survey was there was less panic buying.

“However, we did see some panic buying again recently when Townsville and Brisbane went into lockdown.

“We need to keep reminding residents that this panic buying is not necessary and impacts most on the most vulnerable in our community.”

Cr May said the outlook for Mackay region events was also on the improve.

“In the survey, 70 per cent said they would attend a small event in the next three months, compared to 36 per cent 12 months ago,’’ she said. 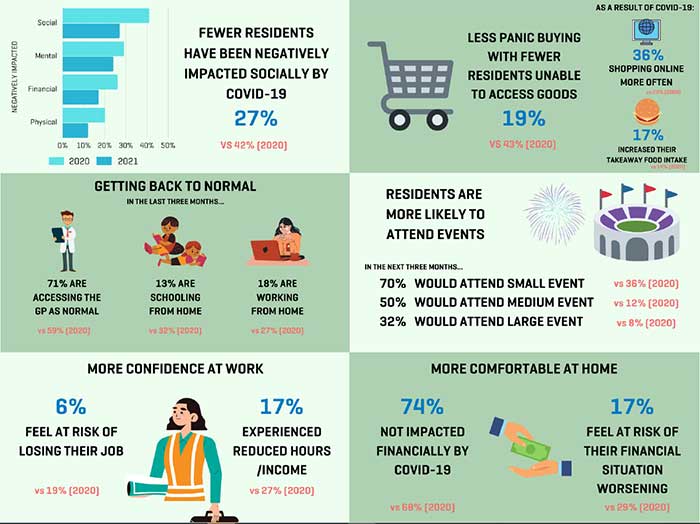 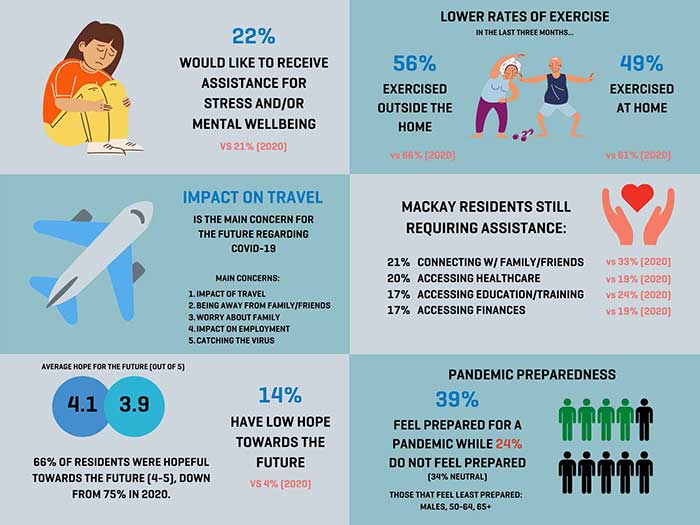