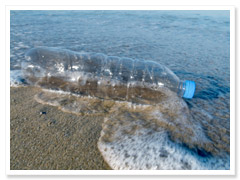 Humans require at least two litres of drinking water a day to keep our bodies hydrated and with our increasingly busy lifestyles, more and more people are purchasing bottled water. In 2009-10 approximately 582.9 million litres of bottled water was consumed (IBISWorld Bottled Water Manufacturing in Australia, January 2010). Australians spend more than half a billion dollars a year on bottled water. Year on year, the sale of bottled water increases by at least 2.5 percent. While bottled water has become a lucrative business for a few multi-nationals, it has created another hit on the environment and hip pocket for most.

If you’re a consumer of bottled water, the following three areas of concern, may have you questioning and avoiding bottled water:

Scientists at Goethe University in Frankfurt housed estrogen sensitive snails in PET plastic bottles and glass bottles for an eight week period. Eight weeks later, female snails living in plastic bottles had more than twice as many embryos inside their bodies compared to the glass-grown snails. Similar studies have revealed similar results, with evidence mounting that levels of estrogenic-compounds in water held in plastic bottles is surprisingly high.

The effect of higher estrogens on the human body includes increased body fat, depression and headaches, increased risk of breast cancer, decreased libido, increased blood clotting amongst many others.

In contrast, tap water requires no additional water to reach you and drinking water out of a tap uses only 0.2 mega joules (or 13 per cent of the energy used in bottled water) of energy according to the assistant director of design at RMIT University.

Buy a stainless steel drink bottle to refill and reuse. Given the continued health queries about plastic bottles leaching chemicals (i.e. BPA or BIsphenol A) and hormones (i.e. Estrogen), play it safe and use a stainless steel bottle.

Drink tap water. Australia’s water is world best in terms of quality with few health problems associated with drinking or refilling straight from the tap.

Use a water filter to clean tap or tank water. In some areas (and times of the year) the chlorine levels and sediment in tap water can concern people. If so, invest in a water filter to purify and improve the quality of your water.

Lobby you local council to:

Eat more foods that inhibit or moderate estrogen. While avoiding bottled water is the aim, it’s a reality that total avoidance of plastic in our food chain is a challenge. Given the potential for estrogenic chemicals leeching from plastic to water, it makes sense to eat more of those plants that contain estrogen inhibiting compounds such as flavonoids and indoles. These are found in passiflora, chamomile, bee products, citrus fruits, onion, garlic, and cruciferous vegetables (broccoli, cauliflower, brussel sprouts and cabbage). Other beneficial estrogen modulators are omega 3 fatty acids (N-3), derived from flaxseeds, hempseeds and fatty fish.

Bottled water is an inefficient way to hydrate our bodies. It consumes over 7 times more water and energy to deliver water to us than the tap. Growing evidence suggests that plastic is not as benign to human health as we were first led to believe, with concerns about estrogenic leaching emerging in the scientific community.

In times of drought and climate change, water and energy efficiency are critical issues and our tap delivered water system is efficient, equitable and seven times more efficient than bottled water.

Drinking water is essential to cleanse, hydrate and nourish our bodies. The introduction of any detrimental chemicals or compounds, even at subtle levels will compound in the human body over time. The risk of PET plastics leaching estrogenic compounds and causing the ailments associated with high estrogen levels is simply not worth the risk. Did we mention that avoiding plastic bottled water will save you money as well?

The Story of Bottled Water