Animals of the region

The region is home to a wide diversity of animals, including 62 mammal species, 350 birds, 95 reptiles, 31 frogs and 44 fish species. About 10 per cent of these animals are listed as rare or threatened under the Queensland Nature Conservation Act 1992.

Find out about our region's fauna:

Over 350 species of birds have been found in the Mackay region.  Some birds, such as the Australian Magpie are commonly seen in gardens and parks, whilst other such as the Eungella Honeyeater, are only found in small numbers in particular locations.

The guide to birdwatching around Mackay and Pioneer Valley (PDF 1MB) recommends good spots for observing birds in the region and identifies birds commonly found at each site.

Sandfly Creek Environmental Reserve, located off East Gordon Street, supports one of the highest diversities of shorebirds in the region. Twenty-nine species have been recorded at the site, including 22 migratory species, and seven resident species.

The Shellgrit Creek area, located off Illawong Drive, is equally important and bird species including the Eastern Curlew, Great Knot and Bar-tailed Godwit, roost on the foreshore during high tides, when their feeding grounds are under water. The exclusion zone for Shellgrit Creek includes both the beach and the reserve.

Dog walkers are asked to seek alternative routes during the exclusion periods. Pedestrians are asked to stick to walking tracks and observe all wildlife from a distance to minimise human disturbance. 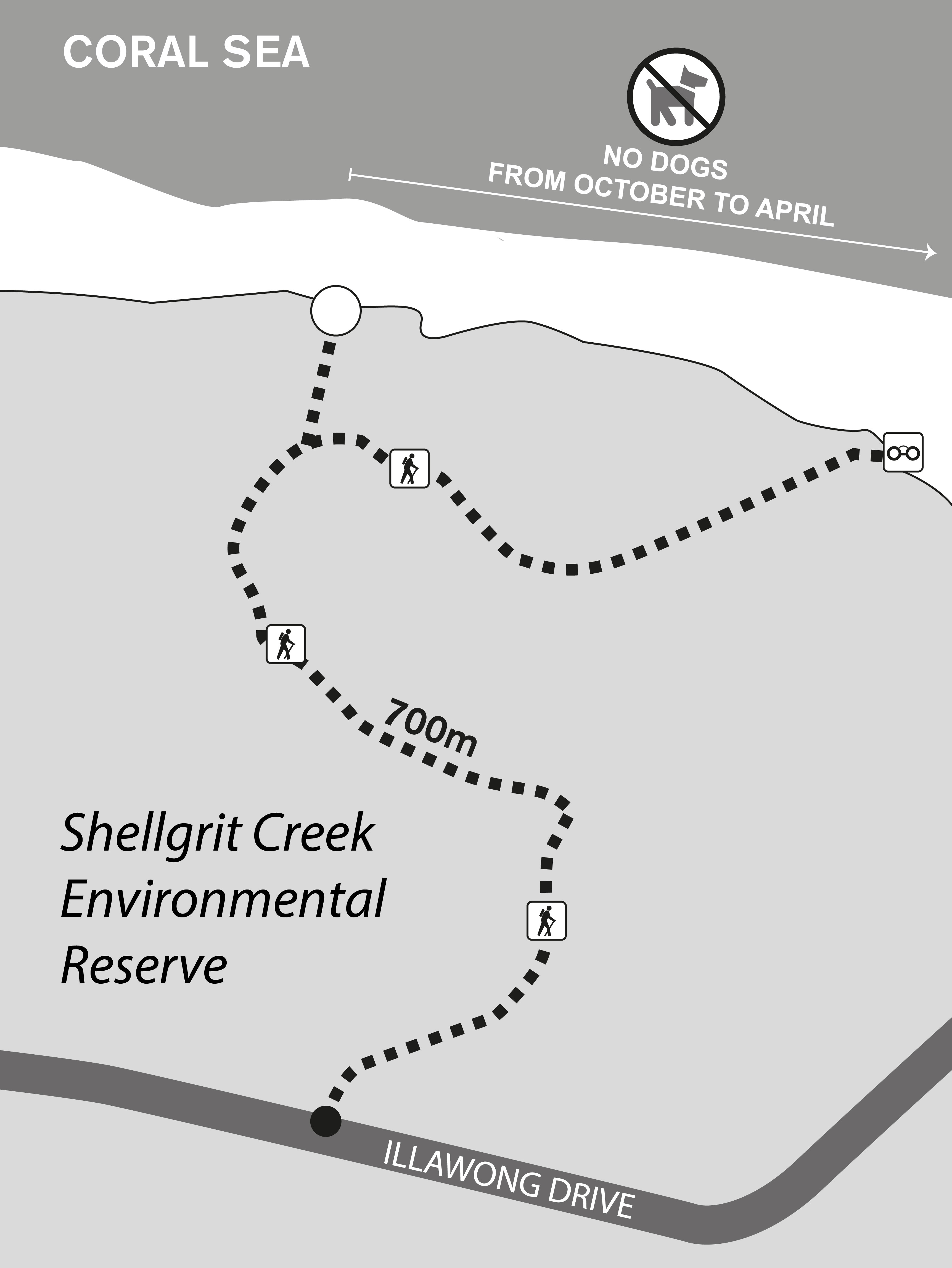 There are seven species of marine turtles worldwide.  Six of these species are found in Queensland.  The majority of the turtles that nest in the Mackay Whitsunday region, are Flatback turtles (Natator depressus).  Green turtles (Chelonia mydas) occasionally nest in the area and Loggerhead Turtles (Caretta caretta) sometimes nest on offshore islands in the region.  All sandy beaches in the Mackay Whitsunday region are considered to be possible turtle nesting sites.  Flatback and Green turtles are listed as vulnerable, and the Loggerhead turtle is listed as endangered under the Environment Protection and Biodiversity Conservation Act 1999.

Marine turtle nesting sites and habitat areas are under threat from urbanisation and human impacts.  Beachfront development and degradation of coastal vegetation disturb turtle nesting habitat. Turtle hatchlings are easily disoriented by light pollution.  Dogs and other animals can disturb and destroy turtle nests.  Vehicles on beaches can damage turtle nests, collide with nesting animals and leave wheel ruts on the beach which hatchlings can get stuck in when they are trying to make it to the sea.  Turtles can be injured by boats, get trapped in fishing nets and become sick from eating plastic bags, which they mistake for jellyfish, one of their main food sources.

The turtle nesting season in the Mackay area, starts in October and continues through until early to mid January.  Turtle eggs hatch until about April.  The Mackay and District Turtle Watch association estimate that between 30 and 100 turtles nest in this region each year.  During the nesting season, Flatback turtles nest three times on average, about two weeks apart, laying around 50 eggs each time.  Turtles don't nest every year, but when they do, they usually return to the same area.

Several species of flying foxes exist in the region.  The species most commonly seen in Mackay is the Black Flying-fox or Pteropus alecto and they are protected under the Nature Conservation Act 1992. They feed on fruit and blossoms, from both native and exotic plants.  They feed at night, finding their food by sight and smell, and travelling up to 50km distance.  During the day, Black Flying-foxes roost in communal camps.  This species can grow up to 26cm in length and weigh 700g. Their preferred habitat includes mangrove areas, river estuaries, paperbark swamps and sometimes rainforest areas. Flying foxes play an important role as pollinators and seed dispersers in native forests.

The False Water-rat (Xeromys myoides) is listed as vulnerable under the Environment Protection and Biodiversity Conservation Act 1999. It is known to occur in small numbers in scattered sites in the Proserpine-Mackay area.  The False Water-rat is actually a mouse, and although it lives in a marine environment, it is not able to swim. It is only 180mm long including its 80mm tail. The False Water-rat typically feeds in mangroves on low tides at night, on crabs and other small crustaceans, shellfish and flatworms.  When the tide is high, it seeks shelter in grass and sedge vegetation. It usually builds mud and leaf nest mounds up to 60cm high where it raises its young, but can also nest sites in burrows or stumps.  Its habitat includes saline grassland, mangrove areas, saltmarsh and coastal wetlands.

Threats to this species' survival include loss or alteration of wetlands through industrial or urban development, aquaculture projects, acid-sulphate contamination, changes to water regimes and clearing of mangroves.  The False Water-rat may also be vulnerable to predation from feral pigs, cats, dogs and foxes. Pollution of water by oil spills and pesticides threaten its food resources and trampling by cattle may damage nest mounds.