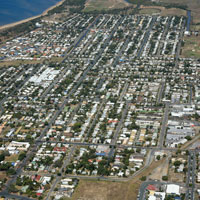 One of the first areas in Mackay to have been urbanised, East Mackay is a welcoming place with two popular beaches and a variety of parklands

Views of islands, calm seas and golden sands typify the Mackay experience. But East Mackay is the most conveniently placed suburb in the City to witness it in all its glory.

The suburb’s eastern boundary meets with the blue of the Coral Sea and parkland extends almost unbroken down its length, with many shaded picnic areas, children’s playgrounds and an abundance of schools close by.

East Mackay is exceptionally close to the CBD, making it possible to cycle the flat streets to work.

Many homes in East Mackay are older brick homesteads or ornate Queenslanders. Prominent streets such as park-fronting Goldsmith, Shakespeare and Creal are lined with large homes, featuring granny flats and split-level living.