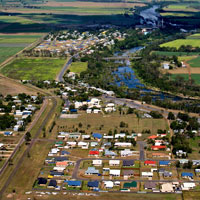 The riverside town of Marian is recognised as the gateway to the lush Pioneer Valley. Thirty kilometres from Mackay, it is reached by passing through the tiny hamlets of Palmyra and Pleystowe; the latter having once been the site of a cotton plantation.

Just before arriving at Marian, the residential enclave of Nabilla has a handful of streets with small new and near-new homes that are perfect for retirees or investors.

Marian is named after the railway station that closed in1996 and which reportedly took its name from a neighbouring property called "Mary Ann".

Marian has a good number of quaint historic buildings and is home to the largest sugar mill in the Region. Surrounded by cane fields in all directions, Marian's mill is the busiest sugar processor during the crush.