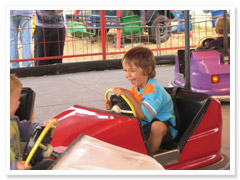 With the emergence of peak oil and climate change as hot issues, car manufacturers have been focusing on fuel efficiency, aerodynamics and hybrid technology. So when you’re next in the market for a new set of wheels, consider buying an energy efficient car.

Cars are the primary mode of transport in Australia with most households having at least one. The current generation of cars emit greenhouse gases, which contribute to climate change. For every litre of petrol used in a motor vehicle, 2.3 kilograms of carbon dioxide (CO2) is released from the exhaust.

The new breed of efficient cars and hybrids are increasing fuel efficiency by significant margins and with electric cars about to emerge onto the market in the next few years, we will soon have cars with zero net carbon emissions.

As one of the major investments for most families, car efficiency also means lower running costs, better insurance rates and even green loans.

The efficiency of the vehicle (design, engine, weight, etc) determines the fuel consumption and the amount of greenhouse gases and airborne pollution released per kilometre, so there are many factors to consider when aiming to reduce the emissions you create.

Fuel efficient cars have a number of benefits:

As the following table demonstrates, an efficient car reduces both your annual CO2 emissions and the amount of money you pump into your car at the petrol bowser.

The Green Vehicle Guide rates new Australian vehicles based on greenhouse and air pollution emissions. Anyone buying a car can use the guide to identify the vehicle which best meets their needs as well as one that reduces the impact on climate change and urban air quality.

You can use the Fuel Consumption Label on new vehicles to compare the fuel consumption of different vehicles and estimate how much it will cost to run various models and makes.

To give an indication of potential savings, a difference in fuel consumption of just one litre per 100 kilometres will cost the average motorist about $225 a year. This is based on the motorist travelling 15,000 kilometres during the year with petrol costing $1.50 per litre. If the price of fuel per litre increases by 10 cents, the difference in annual fuel costs increases by $15.

Click on the Federal Government's greenhouse gas emissions calculator to find our what your car is costing you and the environment.

Fuels differ in the amount of carbon and energy they contain as well as other characteristics, with implications for fuel economy and greenhouse emissions. The table below lists the amount of CO2 emitted from the exhaust for each litre of a particular fuel covered by the calculator.

The reason the weight of CO2 emissions is greater than the weight of fuel is because of the addition of oxygen from the atmosphere to the fuel during combustion to form CO2.

A new generation of hybrid car technology is combining electric engine and battery technology with super efficient combustion engines to further reduce emissions and increase the effectiveness of hybrid vehicles. New hybrids are planned to go on sale in Australia in the next few years.

In the push to reduce our carbon emissions, the combustion of fossil fuels will eventually focus on a new way to power our cars. The most likely successor is the electric car, which is becoming increasingly popular. They are fuelled by charging electric batteries or by using Hydrogen as a fuel and converting the hydrogen to electric power via a fuel cell.

Combined with renewable electricity, an electric car is an emissions-free solution that is cheaper to run than fossil fuel varieties.

Some of the issues to consider with electric cars include:

Mitsubishi, Honda, Toyota, Nissan and many other car manufacturers will be rolling out electric cars over the next few years. To stay informed visit The Australian Electric Vehicle Association.

For more information on rebates check our rebates and assistance page.

Transportation vehicles produce most of the key chemicals that pollute the air, causing smog and health problems. Global warming is also related to automotive exhaust emissions. Greenhouse gases trap heat and contribute to global warming by keeping a significant percentage of infrared radiation from escaping into space.

We can all do our bit to help reduce climate change by purchasing a vehicle with higher fuel economy and being aware of how to drive our cars efficiently.

Car emissions contribute to climate change and are responsible for much of our air pollution and the respiratory ailments that result (asthma, fatigue, chest infections, etc.). Driving an efficient car will also make your feel that you are taking a positive step toward living sustainably.